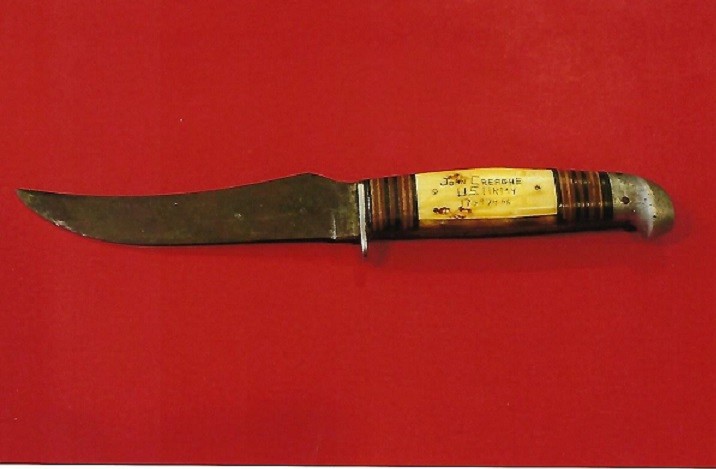 In August 2022, Brett Dean from Seattle contacted the CFHS website with a story about a knife. In 1982, Brett’s father, Marlin Dean, was deer hunting on the slopes of Baldy Peak just north of Hesperus, Colorado when he came across a mine which had been closed off with a metal grate. Being the adventurous type, he returned the next day, circumvented the grate, entered the shaft. After exploring a bit, he noticed a knife lying on the floor of the mine. He picked it up and brought it home. The knife went into a box with other knives he had collected over time. There it sat, until Marlin gave it to Brett this summer along with several others.

Brett, an Army veteran himself – 82nd Airborne, Iraq – was curious about the inscription and began investigating. That led to an inquiry to the CFHS.

It was then confirmed that the knife had belonged to our John S. Creaghe by the inscribed service number: 17087466. This model of hunting knife was common based on internet searches, but I have not seen one with the plate on the handle where it was inscribed. Actually, the printing is quite evocative of examples of John’s handwriting.

Then came the dilemma as to how the knife ended up on the floor of a deserted mine in the Colorado backcountry.

The first clue came from the “Tang Stamp” on the blade. It can be cleaned up enough to reveal the words:

From the stamp we know that the 9 1/8” knife was made by the “Western States Cutlery and Manufacturing Company.” The company was formed in 1911 in Boulder, but the actual manufacturing process was not moved to Boulder until 1920.

John attended the University of Colorado from 1939 until he was inducted into the Army after graduation in April 1943. It is reasonable to assume that he purchased the knife, perhaps in Boulder, near the time he went on active duty with the storied 10th Mountain Division. But the fact that he was, or was about to be, a soldier was important to him. The inclusion of his service number suggests that he was planning to carry it in the Army.

My first hypothesis was that John had lost the knife while participating in the 10th’s infamous, nearly month long “D Series” training exercise held in April 1943.

However, Marlin was able to identify the mine as probably being the “Texas Chief Mine,” a copper and silver mine, that closed in 1928. It is located at 9,639 feet above sea level and over seventy-eight air miles southwest of Camp Hale, which was the home of the 10th Mt. Division. Further research revealed that the “D Series” was conducted to the northeast of the camp around Ptarmigan Pass, about five miles west of what is now Copper Mountain Ski Resort. So much for that idea.

John did not mention any hunting or wilderness camping experiences when interviewed in 2004. Therefore, it seems very unlikely that he personally left the knife there sometime before 1982. While it has been fun trying to figure this story out, I have no idea how the knife ended up in the mine. I guess that it is most likely that John lost it or gave it to someone who put it into the mine.

The CFHS owes a great deal to Marlin for finding and keeping the knife and to Brett for recognizing that he had something special and investigating further. He then sent it to me in August 2022. John would have gotten a kick out of this story.