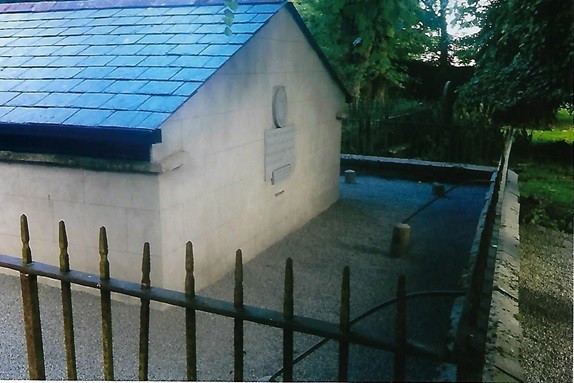 In 1817 Richard Creaghe, D.L. (d. 1837) had a burial vault constructed for his family in the Anglican churchyard, Golden, Co. Tipperary, just across the River Suir from this Castle Park estate.  According to family information available today, Richard, his wife, Matilda Parsons (1769-1835); son Richard F.H. Creaghe (1804-1890) and wife, Anna Maria Archer-Butler (1823-1904); and daughter Anne Creaghe Collins (1803-1837) (See: Ancestors) are buried there.  While there is certainly room for more, there is no indication of whom else may be interred in the structure.  On his visit in 1997, Michael Barnett notes ghosts of what may have been metal plaques indicating those present. This would make a good topic for further professional research.  Inquiries were made, but nothing was easily available in Anglican Church records.

In 1997 Michael and Merril Barnett explored the site:

” We went to Golden, and to the Protestant Church there.  We first went to the Catholic church and school which are both booming, to ask for directions.  I was shown the land next door.  The church is still in one piece, but hasn’t been used for 50 years, and shows obvious signs of neglect.  Vandals have broken in and destroyed much of the interior.

“Sheep feed amongst the graves.  The Creaghe mausoleum is still intact.  It has recently been re-roofed, but the surroundings and steel fence need repair.  RFH Creaghe left 10 pounds a year for its upkeep, but the monies were tied up in an estate for many years.  10 Pounds is not much these days.  I had hoped that the mausoleum would have the details of those interred there, but this is not the case, and if it ever were the case, the inscriptions are now missing.  It is bricked up, with no entrance.  Only the sculptured crest, and name “Constructed by RFH Creaghe” are now visible.

“I was interested in the crest on the mausoleum.  The Nags head is identical to other crests, but the details on the shield are simply of Laurel branches, whereas the crest claimed by Percy Creaghe is more complicated.  I find that there are variations to every crest with each generation having to register their own variation.” (See “Creaghe Research”. Family History)

When we visited in 1998, things were much the same. The vault looked to be in reasonably good shape.  The fence had some missing pieces, some slate roof tiles were missing, and plaster was degrading here and there. The amateur video below shows in more detail  what the vault was like in 1998.

Nine years later,2007, things had deteriorated somewhat in that the roof was in worse shape with a few plants growing in between the tiles and the plaster was worse.  The crest and plaque was even more difficult to read.

Sheep were still pastured in the churchyard and the gate was locked. A nice lady who lived nearby called the man who owned the sheep, and he was there in five minutes to open the gate. Now the key is reportedly available at the Post Office in Golden.

In 2014, Brendan O’Riordan of O’Riordan Monumental Works Ltd in Cashel was asked to look at the site.  His report was not good – near failure, actually.  There were trees growing out of the roof, the motto was unreadable and the plaster was almost gone on three sides.  The roof had been breached in one place by a tree.  The opening was small and did not appear to be vandalism.  Brendan did not look into the vault.

The back of the vault was protected by the churchyard wall and did not need much work.  The outline of what would be the entrance can be seen.  Half of the structure is below ground-level.  To open the entrance would require excavating that area.  There was no reason to enter the vault to effect repairs; therefore, it was not done.

The concrete roof underlying the slate was remarkably deteriorated by effects of water and roots.  The old slate and rotten concrete were removed.  A new roof was constructed with treated lumber and new concrete poured between the rafters to overlay the old roof.

New slate was then fixed in place with screws; gutters and drainage systems were installed to keep more water away from the structure. It rains a bit there.

The walls were cleared down to the rough structural stone and re-plastered with faux stone lines placed.  The crest and plaque were integral to the walls and were cleaned and re- cut on site.  A plaque commemorating the restoration was added.  The fence was repaired, and the ground was cleared and covered with stone chips.

I think the result was excellent.  As Brendan puts it, “It should outlast us both, Stephen.”  Another two hundred years would be great.  Drop by, let everyone know how it looks.  Elizabeth Shand saw it soon after reconstruction and was pleased.