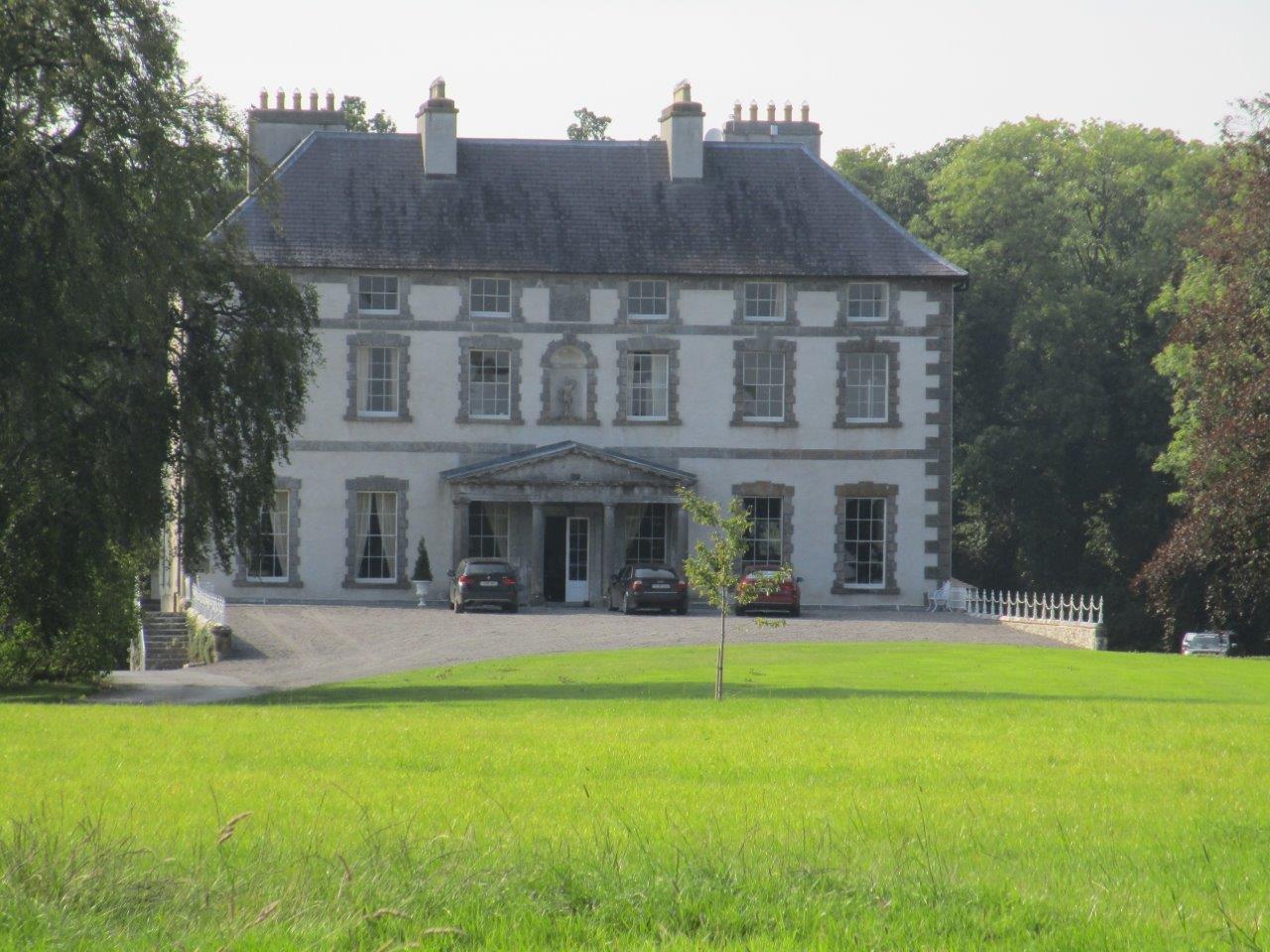 Greetings to one and all. We continue to chug along; there are a couple of new posts to check out. In Sites, have a look at “Saipan and Tinian”; a major event occurred there, and we were represented. In “Artifacts” a small mystery maybe solved, and a connection to an important family in  late 19th Century American Southwest is re- enforced . Lucy Corning Brackett and her husband, Bill, successfully complete their expedition to Ireland in September, and her report follows. Also, an inquiry was made by a Creagh family member regarding a connection; have a look.  I have made no progress on the “Family Tree Issue”, but I am still working on it.

Lucy Corning Brackett and her husband, Bill, did take their trip to Ireland in September as planned. Their research was as thorough as I expected. Lucy was also exploring her mother’s side – Tobin and Hogan. She is quite Irish. I have included the results of her efforts as they pertain to the Creaghe Family. When information like this is gathered, more questions and new unknowns always come to light. Lucy continues to work on the new issues, and will keep us informed as this process evolves. Elizabeth Shand provided information that was valuable to the whole process.

Of our trip—all went well, with the 5 day rail tour, and the far less hectic schedule making my Tipperary and then Kilkenny Co. contacts.

Brendan O’Rierdon was enormously helpful, and convinced me to cancel our Clonmel B & B since my area of focus was closer to Cashel, and he personally secured a reservation for us at a B & B where he knows the owners. The cost was very reasonable. Brendan then took us over to the nearby cemetery. burial vault area too.  Brendan said the Creaghe family was “of means and stature” to have an above ground burial vault, the only one in the church cemetery. I think on a future trip it would be nice to see if it’s possible to clean up the overgrown brush all the way around. Yes, quite an undertaking. And I wonder, who, if anybody, could restore the church. I’d love to find out what the inside looks like.

Liam Maher said that the furthermost side (south, north, I don’t know) of the original Creaghe property comes up and touches the back side of the church shown here

In the Golden P.O.  I did find a poor-quality print of the Scully [Creaghe] house and took a pic of it. Also, Liam Maher goes into detail about what happened to the 28 room Creaghe house when his parents bought the property. The house was dynamited and bulldozed because Liam’s dad thought that the disrepair was beyond renovation.  The Irish love story-telling. Liam’s version was confirmed by historian Eddie Dalton!

Last contact was with Liam Maher, who is the current owner of the Creaghe property. Liam lives on a portion of what was the Creaghe property, outside of Golden, Co. Tipperary. His parents, who bought the property in ’69 for what I think Liam said was 9,000 euros, live in a modern house on the property—-along with 50 head of cattle. With no appointment, Liam still insisted on meeting us, showing us around for almost two hours. We learned so much about the former Creaghe property from Liam. He was quite the character! Liam has been on Irish TV:  http://www.irishtv.ie/tipperary-matters-57   The last part of this 25 plus minute video goes to Golden, Tipperary.  Eddie Dalton has also been on Irish TV [see “References”].

The Creaghe property today, about 27 acres of it. Liam is shown with Bill in
a couple of photos. Bill and I stand outside the front iron gate.

-A couple of shots of what was the Creaghe property are above. That’s Liam standing with Bill under the original arch and connecting wall.

Looking across the street from the Maher property, at land was also part of
the 2,500 acre spread. (Liam’s figure). [Persse’s Lot]

Wrapping up interview with Eddie Dalton, a professional genealogist from Golden, a village in County Tipperary. To his left is his wife, Julia(?) Dalton. (Her maiden name was Tobin, but there’s no apparent relation to our family.) Eddie has been a frequent guest on Irish TV and historical tours.

We were then off to Castle Blunden, just over the border from County Tipperary and in County Kilkenny.

Castle Blunden was originally a 13 bedroom, 2 bathroom house where former occupants Sir William and Lady Pamela Blunden raised their six girls. Current owner Patrick Blunden is wrapping up 10 yrs. of renovating the place.  Since Patrick started renovating it, he has turned  it into a 9 bedroom, 9 bathroom home. All the bath tubs are jumbo size. Patrick, age 36, is 6’7”!  He had about four teams of remodeling crews there on the day we arrived.

I forgot to ask how old the place is, and how long it’s been in the Blunden family. I’ll find out. We have a great-great aunt (might be another “great” in there), Phyllis Creaghe, who married into the Blunden family. That’s how the Blundens know about the Creaghe’s. Uncle Charles visited the 340-plus acre estate in the eighties. The estate isn’t on any public registry because it is privately owned.

We had a wonderful, unhurried visit with Fiona (Blunden) McGovern, Lady Pamela’s  youngest daughter, of Vermont.  Her mother was temporarily in a health care facility, recovering from a bad ankle break.  I took a bunch of photos close to Quarry house, which was built for Lady Pamela who was widowed about 30 years ago. She didn’t need the huge building.

About Castle Blunden-   The current owner is Lady Pamela’s grandson, Patrick Blunden, who lives there with his wife and 2 year old daughter. Patrick  is wrapping up 10 yrs. of renovating the place. He became heir of the castle, since Lady Pamela’s husband, Sir William Blunden, left no male heir on his passing.  He had raised six girls at Castle Blunden! So Patrick inherited it, since Sir William’s brother Phillip had a son (Patrick) that the estate could be passed on to.

Lastly, made a lot of headway at the Thurles Research Center in that town’s library. John, O’Gorman, the main researcher there was quite helpful, and brought up several records—tax, church, civil, etc.  I’ll send you the doc’s he sent to me that relate to the Creaghe’s.

Just after Thanksgiving I received an email on the CFHS website from a possible distant relative, Mary Todd. Her input is reproduced below. She included, at my request, information on her experience with a DNA test provided by Ancestry.com. We are going to do it; I’ll let you know how it turns out.

I just stumbled upon your site and have a few questions.  My husband, Jerry Todd, is descended from a Cray.  His grandfather was Patrick Cray (B 10 Feb 1831) from County Clare, Ireland.  Patrick’s father was Thomas Creagh (b about 1795) and his mother was Mary Sexton.  My research shows Mary died in Ennis, Clare, Ireland.  If I’m correct, that is where the tombs are.  I don’t know if Thomas Creagh had any siblings but I’m sure he did, he was Irish!!!  One of my husband’s cousins said there was always a story in her house about her father (a Creagh) being of royalty.  I think that may be a throw-back to the story about the horses and the battle the Creagh family fought in during the Middle Ages.

As this family was not from Tipperary but from Clare do you think this is still the same family?  Do you know if any of the Creaghe’s had a DNA test through Ancestry DNA?  My husband has had the test and we do get some matches to unknown people in Colorado.

The reason I was researching the Tombs is because we will be in County Clare in May and one of my husband’s cousins told us about them.  We had never heard anything about them before.

You certainly have my permission to post my note in the Blog.  Any way I can find more relative the better!!  The cousin I mention above found me due to a post I had made on Ancestry.com .

Both my husband, Jerry, and I have used Ancestry DNA and FamilyTree DNA.  I administer both tests and I prefer Ancestry.  For one thing, they have the largest database of any provider so consequently you will have more results with Ancestry.  That can be a bad thing as well as a GREAT thing.  What I mean is you get so many results due to the large database and most of them are rated only as Moderate.  Jerry’s great-grandfather had been a brick wall for me for years but then he had a DNA match to someone who had a relative by the correct name and had lived in the correct area at the correct time.  With that information, I was able to trace that person and made a determination I had finally found Jerry’s great-grandfather.  We never had any luck with FamilyTree DNA.  Right now, Ancestry is having a special on their DNA test.  As far as I know they only do one type of test now.  I will forward the note I received from them to you.  They are charging $69 for the test, usually $99 but the sale Monday.  If you do have that test done please let me know so I can look for a possible match between you and Jerry.  I have found several of Jerry’s cousins through DNA matches.

We are in Florida but originally from New Jersey.  The Cray (Creagh) family Jerry is descended from lived in Pennsylvania.  His grandmother was Margaret Cray.  Her father was John Cray, born in Massachusetts and John’s father was Patrick Creagh, born in Ireland.  I believe he was born in County Clare but have not been able to prove it yet so I don’t claim County Clare.  I have had some proof that his 3rd great-grandmother, Mary Sexton, died in 1867 in Ennis, Clare, Ireland.

As I was reading the papers on your website I started to think perhaps the families are not related.  From what I could gather from my readings it seems your family belonged to the Church of England.  Jerry’s family was Catholic.  I have also decided the death year I have for Mary Sexton Creagh is incorrect.  I checked on Familysearch.com for Mary Creagh died in 1867 in Ennis and that person was 0 at time of death.  That makes me think it was a stillborn infant.  In any event, the DNA test should show if there is a connection.  If you need any help reading the results, please don’t hesitate to ask.  I had to consult a professional at one time and she did teach me a lot about reading the results.

Question for the Group

Regarding Catholic -Protestant thing, does anyone know when our branch became Anglican? It seems to me that it could have occurred while John Creaghe, Eustatius lived in the West Indies. Thoughts?

Again, my usual plea for more articles and information. Eventually we will run out of stuff that I know. Anything can be helpful; photo, letters, newspaper article, rumors, legends, ….