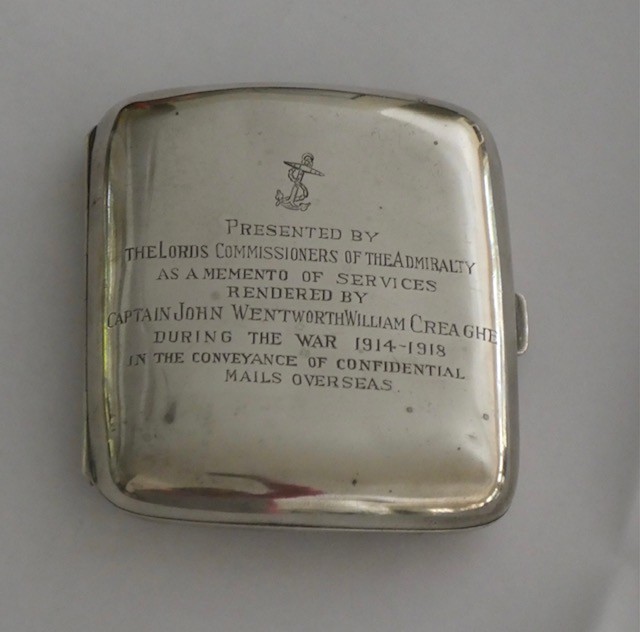 Elizabeth (Creaghe) Shand of Brisbane, Australia, relates the story behind this interesting item:  “When I visited Sir William and Lady Pamela [Blunden] in 1975, they gave this case to me.  I think I was one of the only Creaghes who had visited them at that time.  It is a pity it doesn’t have a date, but it is an interesting addition to the article you wrote in 2018 [J.W.W. Creaghe and Julia Rae Creaghe].”

As the inscription shows, the case was presented to John W.W. Creaghe (1850 – 1931) in appreciation of his service conveying confidential mail overseas in WWI.  So, perhaps John did not retire from the sea in 1916 as assumed in the biographical article, or he may have done the service as a private citizen, or the dates may simply refer to the dates of the war itself.  I think that the “Lord’s Commissioners of the Admiralty” can be viewed as the Secretary of the Navy in the United States.

Many times, new material creates more questions.  For instance, how did this get to the Blunden family in the first place?  The most logical path is John to his brother, Philip Crampton Creaghe, then to Philip’s daughter Phyllis, who married Sir John Blunden, and finally to their son, Sir William Blunden.  Of course, steps could have been skipped in the chain.  It now resides in Australia with Elizabeth Shand.