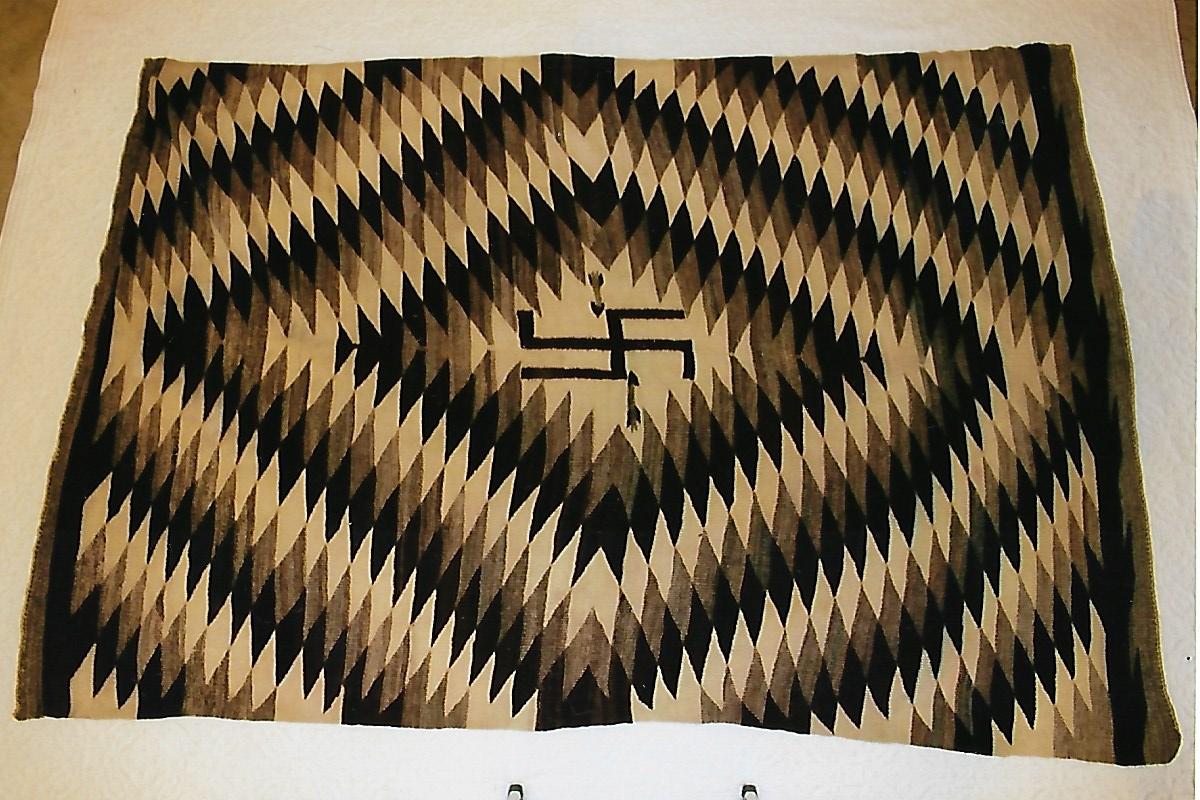 Posted at 09:50h in Artifacts by wpsociety 0 Comments
0 Likes
Share

My Grandmother, Nellie B. Creaghe (1894-1977), kept a genuine cedar chest tucked in the back of her closet. I first discovered it as a kid in the 1950’s. There was lots of intriguing stuff in it: civil war sword, her sister’s Red Cross uniform badges from WW I, old books, and, at the bottom, these two “Indian” blankets and two smaller weavings. Not much was known about them except that they came from Arizona and had been in the family for some time. My father, Lawrence B. (1920-2011), used the gray one as a bedspread in college from 1938-1942; I did the same in 1965.

The weavings remained in storage for thirty years. Then, in 1994 on a family vacation to “Indian Country” in northwest Arizona, we stopped by the Hubbell Trading Post National Historic Site near Ganado, Arizona. Conversation in the curator’s office revealed that Lorenzo Hubbell (1853-1930) and St. George Creaghe (1852-1924) were contemporaries and probably knew each other, As the Curator put it, “There weren’t that many Anglos in the area” in the late 19th Century. Later, they explored their files, and found six letters written by to Don Lorenzo by St. George and the family. Two are reproduced below. They were written by Serapia Bazan Creaghe (1855-1936),St. George’s wife, and referred to Lorenzo as “cousin” or “uncle”. Apparently, they, in fact did, know each other, quite well.

The original (top) is written in Spanish in Serapia’s hand and is not dated,  but is presumably from the early 1900’s.

The clarification of the old Spanish script was done by  Maria Clara Sierra Gallón and Juan José Sierra Restrepo, 2016.

Below is  the translation into English ; done by CFHS Linguist, Noelie Creaghe

My Dear Don Lorenzo. I

will tell you what is happening to me

uncle: when I came here

to this land (you told me1) that when I would have

a home, you would give me a gift

the floor of my room.

I am sorry I would not have

asked but my cousin Lina,

your wife, told me that you

would charge for my gift

and that is it. Your cousin Sera Creaghe.

[P.S.]Send me the bracelets no more than 4

and a small one. Your cousin S.C.

who would love to see you again.

context does not us to determine it further, so I kept the

This letter, on the same topic, was written for Serapia – perhaps by one of her daughters, only Anne was not living at home in 1905

For the next nineteen years, the question was; “Could the weavings from the cedar chest be the rugs and “tilma” referred to in the letters?”  In 2013 the items were expertly repaired and cleaned and then referred to David Cook of David Cook Galleries in Denver. He is a recognized expert on Southwest Native American Art. The smaller items were not evaluated formally, because they were of Mexican origin and did not have the value or interest of the large weavings.

This blanket or rug is heavy and large. It is almost to heavy to be worn. The swastika- like whirling log motif was common before World War II; it is not seen after that time.

This  blanket or rug is not as large, but still quite heavy.  The detail shows some “dye run” as described below.

The weavings below were also in the chest. They are much smaller and lighter; perhaps cotton instead of wool. These seem to be more of a shawl ( tilma) than a rug or blanket.  These items were not evaluated formally, because they were of Mexican origin and did not have the value or interest of the large weavings, as per the experts.

So, based on the above, the time is right, and the tribe is right. These rugs could well be the two blankets from Nellie’s cedar chest: maybe even probably. I’m going with probably. The smaller items could also be the be the “tilmas”. I am going with probably on that too. A big question is, “What happened to the silver bracelets?”  If they could be found, that would be a very cool thing.