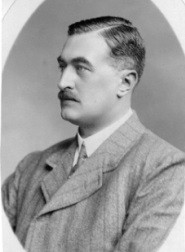 Our family owes a debt of gratitude to Percy Creaghe in that he collected, collated, and commented on family papers and letters he compiled in the 1930’s.  Michael Barnett obtained copies of the papers during a visit with Lady Pamela Blunden and her daughter Fiona at Castle Blunden in 1997.   Thanks to Michael’s efforts, the collection is available on the CFHS Website under Family History – The Creaghe Family in Ireland.  Percy’s efforts provide our best knowledge of the family from the tenth century to the first part of the twentieth century.  He also compiled a scrapbook which would be a treasure if it could be found (see ancestors – Gerald F. Creaghe, CFHS website).

Percy was born August 9, 1875, the eldest of three children to Philip Crampton Creaghe (1850-1933) and Isabel Emily Seton-Chisholm (1853-1914).  The place of birth is not known, but could possibly be Kilkenny, Ireland.  Brother, Hubert, followed in 1877 and sister, Phyllis, in 1885.  Phyllis’ marriage to Sir John Blunden connects our family with the Blunden family of Kilkenny.

By 1886,at age 11 , Percy was enrolled at Ramsgate College in England were he stayed until 1893. The drawing below was presumably done near the end of his stay at the school at age 17 or 18.

Presumably, Percy stayed in England, moving eventually to Ottery St Mary in Devon, in southwester England. At some point he met Percy met Evelyn Hope Negus, and they were married there on August 8, 1912.  Evelyn’s father was Thomas Addison Negus of Shenstone Lodge, Lichfield, Staffordshire in the middle of England.  Their two daughters, Helen and Jean, were born in 1913 and 1915 respectively.

This family crest and coat of arms was found by Patrick Lea and is Percy’s choice for his family.

The next piece of hard data shows that Percy took the position of Estate / Land Agent at Home Farm on Luscombe Estate, Dawlish, Devon – not far from Ottery St Mary – in 1918.  The family moved into “a fine house built for an Estate Agent in 1866-1870.” (Dawlish Local History Group Newsletter, September 2000).  He held this position until sometime in the 1930s.

A clue to another aspect of Percy’s past came to light in the spring of 2019 when the CFHS received a request for information from Graeme Robertson, vice-president of the St Helena, Ascension, and Tristan da Cunha Philatelic Society.  Mr. Robertson, who lives in the Outer Hebrides Islands west of Scotland, had collected several covers (envelopes) addressed to Percy or his wife from Tristan da Cunha islanders during the time the Creaghes spent at Luscombe Estate.  Keep in mind that Tristan da Cunha, a British Overseas Territory, is an extremely remote island in the South Atlantic Ocean. In fact, it is considered to be the most remote settlement in the world. Just what the connection was is not clear, but it is possible that the Creaghes were associated with the Tristan de Cunha Fund which was a UK based organization. As early as 1918 they were receiving letters from the islands. One from a Susan Hagan dated July 7, 1918 speaks of the time it takes to exchange mail, the heartbreak of mothers losing sons in WWI, gives thanks for clothes sent from England as arranged by Evelyn, and requests “a little chocklet.” Another, sent by David Hagan in May 1922, was carried by the very small Norwegian ship, “Quest,” on its return leg of the ill-fated Shackleton – Rowett Expedition to Antarctica from 1921 -1922. These letters took remarkable journeys on their way to England.

Mr. Robertson is researching Percy in order to write an article about him for the South Atlantic Chronicle.  He has found that in addition to clothes, the Creaghes donated “a hand stamp to produce a Type II Cachet (postmark) for outgoing mail” in March 1919.  It was used for another ten years. Percy and Evelyn obviously had a significant connection to the people of the island.

Coincidentally, a few months later contact was made via the website with Patrick Lea who currently lives in Gosport, Hampshire, England.  Patrick is Percy’s great-grandson via Percy’s younger daughter, Jean Isabelle Creaghe (1915 -2008).  Her daughter, Diana Evelyn Lea (b. 1947), is Patrick’s mother.  Patrick shared that this grandmother, Jean, was a private person who did not share much of her family’s story.  His mother does remember displays of postcards and envelopes from Tristan da Cunha in Jean’s possession.  However, in about 1970, a con man tricked Jean out of these “items and selling them along with a large collection of other items that have a historic connection to the Creaghe family, some of which were of considerable monetary value.”  Perhaps, some of the covers for sale today are from this theft.  Other items were destroyed in a house fire in 1988.  Anything left had been passed to Percy’s older daughter Helen (Creaghe) Holmes and her family.  Michael Barnett met with Helen in 1998 at which time she told of the family silver being taken from her home when burglars broke in and stole the lot.  As of 1998, nothing had been recovered.  Tragedies all, but not uncommon in family histories.

Patrick’s mother, Diana, does recall that Percy was given a mounted, white porcelain penguin by the people of Tristan da Cunha.  Just why is not known.  At this writing, Graeme Robertson is planning an April 2020 trip to the island and will endeavor to determine the significance of the penguin.

Patrick Lea also reports that he was born and raised in the small village of Wiggaton, just south of Ottery St Mary in Devonshire.  Perhaps Ottery St Mary is where the family moved after Percy’s time as Estate/Land Agent at Luscombe.

The last piece of hard data we have at this time is from the London Gazette of August 8th, 1947 which noted the death of “Percy F.S. Creaghe, Gentleman, at Longmead, West Hill, Ottery St Mary, Devon on July 27,1947.”  I do hope more information will be forthcoming regarding this interesting man and his family.