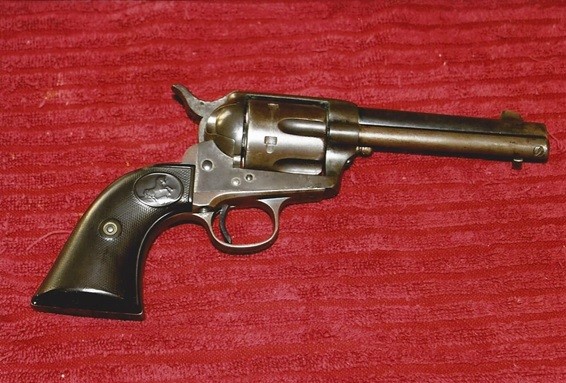 Posted at 09:50h in Artifacts by wpsociety 0 Comments
0 Likes
Share

According to the Colt firearms expert in Denver, Dave Weddle of Frontier Gallery, this is a Colt Single Action Army (SAA) model .45 caliber pistol, serial number 154856. It was manufactured at the Hartford, Connecticut factory in 1894.This model was produced in large numbers in anticipation of landing a contract to supply the U.S. Army. However, they chose a Smith & Wesson product that was faster and easier to reload.

The frame is a “Black Powder Frame”; that is to say, it is made of iron. Colt went to a stronger, steel alloy to accommodate the forces generated by smokeless powder introduced later.

The grips are made of gutta-percha, a natural hard rubber. The left grip is not the original. In spite of having been replaced, it shows significant “holster wear”, and has a fragment broken out of the top edge. The right grip is original and shows less wear. The pistol has been worked on in the past as evidenced by the “buggered up” wear on the screw heads which comes from not using the proper screw driver.

According to Mr. Weedle, a pistol of this type could be effective at 100 yards, but was probably considered useful only to 50 yards. Even at the shorter range, it would take a great deal of practice and knowledge of the gun’s particular characteristics. Based on my reading, this is why lawmen, and outlaws, preferred rifles for anything over a few yards.